In the first part of this interview, I talked with Murali Murugasu and David Payes about the genesis of Constellation Audio and its products. In this second part, I find out specifics, including who is designing these new-to-the-market extreme products.

Michael Fremer: Let’s talk about what you showed here at the CES.

Fremer: I didn’t see that but —

Murugasu: And currently what we’ve done with it is we sourced some high-definition recordings from Reference Recordings and put it into USBs. I saw this server, a concept of it, some time ago in the US, and then they implemented it for us. So that’s that section. Then we were talking about the amplifier, and Peter said, “I know just the guy.” And he said, “I’m not sure whether he will want to do anything, but I’ll speak to him and tell him.” He’s happy to look at it, but he is a shy and retiring type. He likes to not be in the forefront. His name is Bascom King. And together with Peter, they presented a couple of designs to us. So we had a look at that. And they eventually settled down on a particular topology for the amplification stages, which is a single-ended MOSFET design. The idea behind that was, we have this thing for class-A power and putting it out, even though there are heat issues with it. And this topology, they believe, maximized how much you could get in that sense. So that was the amplification section in terms of sorting that out.

David Payes: There’s a lot more to it than that.

Fremer: However, this is not the time or place for that. We’re trying to get the basics.

Murugasu: No, this is just a brief introduction into them. So that was the amplification design. And all along, Peter has known a certain gentleman, initials JC, and — 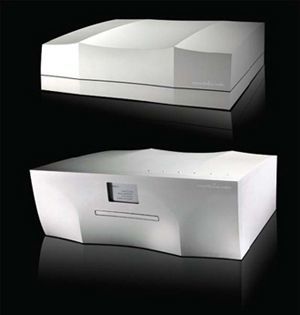 Murugasu: Yes, I believe that’s public knowledge. I hope so.

Payes: Not off the record.

Murugasu: Correct. And I asked him, would John be interested in putting in any input, realizing John is very busy with other projects of this and so on, but I have heard that he does sometimes from time to time do these things, and —

Fremer: And he’s worked for a long time building to a price point, too, and this would be an opportunity for him to — and he’s done incredibly good work at a price point, so given —

Payes: I’ll just interject here. Putting the design team together wasn’t a matter of just going along and retaining them for a fee. These guys were passionate about working with us, because they saw this as the ability to personally express their own designs, you know, the ultimate of their designs. It’s an expression of their own achievements. And these are their own statement products.

Fremer: Right. And they’re not youngsters, and this is an opportunity that may never come along again.

Payes: May never come along again. So as much as we were passionate about producing something exceptional, they wanted to show the world that they’ve been holding back. And they’ve been holding back because of price considerations or their previous employers may have had their own other involvements or design criteria or sound — “house sound,” as you call it. We allowed these designers to really fully express themselves.

Fremer: And this is also a confluence of the fact that we’re entering a really sophisticated computer age where you can get a combination of all of these microprocessor-controlled devices and the older-style analog electronic design of amplification.

Murugasu: Sure, I think that’s correct. So when Peter spoke to John and had a chat with him, this was primarily to do with a design of a phono stage, which John has an amazing reputation in doing.

Murugasu: And he agreed, much to our delight, because we weren’t really sure whether he would, and furthermore he was happy to consult on the others, you know, the other products. So in that sense we then knew, at least for the electronic side of things, we had an American dream team, as such.

Fremer: And the other question is, there is such a temptation today to design here and build in China. I’ve seen a lot of beautiful things coming from there, but you —

Murugasu: That was never, ever in our heads. We believe at this price point, if you’re going to do a statement level of electronics, you needed to control what was going in, what was coming out. It was very important. They happened to have the facilities to do so. You can also watch exactly what’s happening. Now, so far I’ve talked about the insides, but there’s also the outside.

Murugasu: Vibration control on the inside. I think that is probably a topic that we can go into further discussion of and —

Payes: Also microprocessors and how they kind of talk to each other.

Fremer: Right. That’s a different person. You didn’t mention that Michael Latvis [of Harmonic Resolution Systems] was involved — can we mention him in this?

Murugasu: Sure. We then looked at the vibration because when I spoke to the guys about this and I said to them, “Look, the only thing we need to do is we need to do vibration control from scratch.” Mike Latvis was seen as one of the guys to go to because of his experience, where he comes from, his pedigree there, and he said, “I’ve been waiting for a company to come along to say to me that they want to implement something like this.” And he’s done it. Don’t get me wrong, he’s done it in some form or the other in different products, but never to this level. So that involved a bit of redesign on our part, but it came out really well. We also got what we think is the best industrial designer, that’s Neal Feay Company, to go and do the virtual design for us.

Payes: The vibration control is at the circuit board. All of the circuitry floats on a raft

Fremer: I saw that yesterday.

Payes: Yeah, well you saw that.

Fremer: When I reviewed the HRS SXR rack, I said when anybody comes to your house carrying a book called Engineering with Rubber and it’s not pornography, then you know the guy’s serious.

Murugasu: So we wanted the outside to reflect what was done on the inside. Usually, I think, the outside is, like you said, candy —

Murugasu: It’s very important, but we want it to be functional. So that’s why from the concept it became such that we had the remote — we have two-way control, Wi-Fi control with the products. And that remote talks to every single product along the line, so if something goes wrong with the amplifier, you know. And the volume-control knob, for example, on the remote is an actual analog potentiometer with that particular field.

Fremer: Okay, so you get the team together, and they’re in America and you’re in Australia. How much control or how much oversight did you guys have in this? Did you watch every step of the way or did you think, we’ll, go for a year or go for six months? I mean, how did that work?

Murugasu: Every step of the way. Marvelous thing about the current world that we live in is that there are ways of communicating via video and audio where you can see what’s going on without actually being there. The other wonderful thing was that —

Fremer: It wouldn’t have been possible ten or fifteen years ago. You couldn’t have done it.

Murugasu: Correct. So having video conference calls was part of it. Putting that aside, I think one of the most important things that was there with the team and us from the very beginning was that we all — this might sound corny — liked each other. There was a degree of trust from the beginning, and I knew that they were going to do the best they could. You can tell, I believe, when you meet people what their intentions are and what they’re like, and I think they could tell the same of us. So we had that relationship and that helped a lot. Of course, I came down as well. I had to come down, listen, see what they were doing, and follow up, but no, they kept us up to date all the time.

If you want to receive our latest news send directly to your email, please leave your email address bellow. Subscription is free and you can cancel anytime.

@constellationa2 A look behind the scenes at this past weekend’s High End Mässan Stockholm. Thanks to everyone for stopping by! https://t.co/HgNYwGVcdM
3 years 2 months ago
@constellationa2 A look inside last weekend’s Tokyo Intl Audio Show – thanks to everyone for stopping by! #TIAS2018 #audiophile… https://t.co/EZCaLVUPK6
3 years 5 months ago